Yes, I know I’m like a week and a half late on getting these posted.  I foolishly thought I’d be able to post these daily…like at night as I waited in line outside for something the next day.  The one night I remembered to bring the netbook, I had zero luck getting onto the so-called WiFi network at the con.  At least I was able to move pictures over to save space.  I took like 80 at Nerd HQ alone (but we’ll get to that later…)

SO!  Here’s how the first day of my trip went.  Got to sleep in a little bit.  It may not seem like much but I love that feeling that I’m still in bed and everyone else is at work.  Then I went to get a mani-pedi I had a groupon for, and came home and did the last day’s packing stuff; various chargers and things I can’t pack away until the last day.
Steven was cool enough to wake up early and take us to the airport at 3:30 (pm).  If you know Steven, you’ll get why that’s funny.
Our outbound flight was with Delta, which I’ve never flown before.  One mega plus I will say for Delta is that they have this lounge/bar inside the terminal that you can go chill at instead of sitting out in all the airport chaos.  It was so nice!  Flight was on time and relatively uneventful.  We had a 2 1/2 hour layover in Salt Lake City, which was pretty boring, but once it got closer to boarding time, I spent a while picking out people I thought would be also going to Comic Con (since we were all going to San Diego).  We landed around 11pm, and Jon’s mom came to get us and brought us back to the timeshare we were staying at.  Turns out the place was a few buildings away from one of the stops on the Comic Con free shuttle route, which we ended up utilizing a few times.
We also hit the grocery store for all the munchies and water and stuff we thought we’d need to bring for the rest of the weekend  (granola bars, individually packaged snacks, pop-tarts, etc).  It’s really a strange experience being in a grocery store at 1am when it’s not like a WalMart or something that’s normally busy at that time of night…it was a Food 4 Less that stays open till 2am and it was D-E-A-D.  That store is too big to be that empty.
As you can see, it was a thrilling day (she said in a dry, sarcastic tone).  We went to bed around 2am with the plan to get up and head out about 7:30.  I knew there’d be line-waiting in the morning and we probably should’ve planned to leave earlier than that, but I needed at least 5 hours, especially knowing what the next few nights would be like…..
But for more on that, you’ll have to see the next post!  The next one will even have a bunch of pics!  All you get for this one is me at the airport with my Comic Con registration info.  Woot woot!! 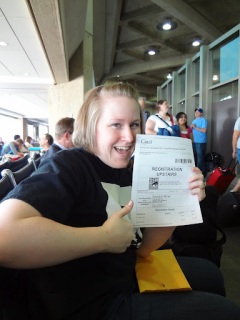 What do you have to say about that? Cancel reply