The last day we got to the convention center at 7:30 and waited in one of the shorter lines I waited in that weekend (only about 2 hours).  This one was the line to get into the exhibit hall (things don’t start until 10 in there).  The reason for the wait to get in we were trying to keep on the DL, since it wasn’t highly advertised and we didn’t need any more competition or crowds.  In October, Marvel is releasing a new comic based on the character in Castle’s old series, Derrick Storm.  So yeah, a comic about a character in a book that only exists in a TV show.  It seems somehow existential to me, but I guess I shouldn’t dwell on it too much.

BUT ANYWAY, since this book is coming out, who else but Nathan Fillion would be be at the Marvel booth signing autographs!  So we got in line to get into the hall, to hurry over to the Marvel booth and wait in line there for a while to do a drawing to see if we could actually get his autograph.  Basically, you pull a card out of a bin and you either get a winning ticket or you don’t.  I made Jon stand in line with me to increase my chances.  A bunch of the girls from the Castle Fan dinner were in line in front of me so I waited with much anxiety as they all took their turns.  Some won, some didn’t.  It came to me, and I reached my hand in and tried to summon a winning card.  My hand passed over a big stack clumped together and I decided those were probably NOT winners so I ignored them.  I eventually drew a card out and mentally squee’d because I had gotten a winning ticket!!

Jon did not get a winning one, but if he and I both had, I might have been stampeeded to get that second one.  It would have been totally lame to have to pick someone.  I don’t do well under that kind of pressure.

After getting my ticket, the booth people gave me another paper card and said I had to have them both to get my autograph.  Also, that I had to come back in 2 hours for the actual signing.  Anticipation was built up already but I was pretty dang used to waiting by then.  Also, this was not in a line, so that was something!  I got to walk around the exhibit floor again for a while.  I made my way over to the Jason Palmer booth and picked up a set of Castle buttons and scoped out all the other artwork he had available for Serenity and other things. It was really good!

Then we made our way to the section with the various fan groups.  R2-D2 was out so I took a pic with him. 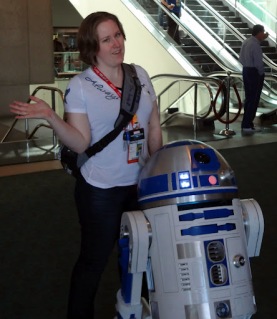 There were a lot of Starwars fan groups, which I guess is not that surprising.  I was surprised to see a booth for Jericho, a show that was on a couple years ago that I really liked, but then that big writers strike happened and when it came back from a hiatus, they didn’t do a very good job of advertising it so a lot of the fans didn’t know to start watching it again.  There was a big fan revolt involving sending peanuts to the network, and the show was brought back for another half-season but that was it.  I learned they continued the story in comic form, so that’s something I should get around to reading.

After that, I wanted to find something cool to have Nathan sign other than the small poster they’d give you if you didn’t have something.  I stopped by the California Browncoats booth and after chatting with the gal there, I decided on a Serenity comic book.

Jon wanted to look through some of the comic booths then so I let him go look through one of the giant comic store booths for a while.  I saw Lou Ferrigno (the oldschool Hulk), so snapped a shot.  I could have paid $40 for a pic WITH him, but…..eh.

Then it was time to head back to the Marvel booth.  They had a guy out in the new Iron Man suit on a rotating platform.  So that’s what the Iron Man suit is going to look like in the next movie, folks.I kinda dug the redder suit better, but since when do movies usually do what I think they should do.  I mean, look at the casting for Green Lantern and the newer Spiderman. 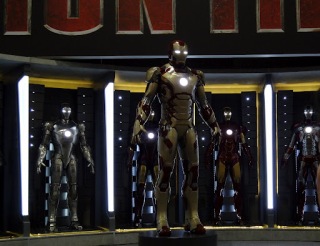 Finally it was time.  I had to wait in line along the side of the Marvel booth, where they were doing a demo of an Avengers video game…one of those ones that measures your movement and you don’t use a controller at all.  It wouldn’t have been so bad except there was a line of little kids right next to us wanting to play that game.  I was too far back in line to see when they brought Nathan out…wish I could’ve seen what all went on when he got out there; there was a lot of cheering.  Slowly we made our way up.  Nathan was up on the stage where the Iron Man suit guy had been (see above), so we all had to go up on the stage to get our signatures.  I tried not to think about all the strangers seeing the backside of me while trying to get a glimpse of Nathan.  I took my camera off my right wrist in anticipation of a handshake.  I gave the booth guy my paper card (got to keep the fancier one that said ‘winner’) and then I got to ascend the stairs.  When I finally get in front of him, he takes my hand and says, “and your name is?” with a smile.  I tell him, and try not to smile like a giant dork.  Smiling, of course, but not like a giant dork.  I may not have succeeded, but only Nathan knows for sure. 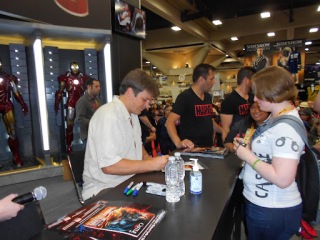 They’d told us we couldn’t try to take pics WITH him, but yeah, I snapped a shot of him while he was signing my book.  So, here’s a pic of the top of his head taken with my nervous hands:

When he hands it back to me, he says, “make sure you let this dry before you put it back in the bag,” and winks at me.  I thank him and float away.  Lindsay said she saw it, too, so I know I didn’t imagine it!

And so ended my 4th Nathan Fillion experience of the weekend.  So in summary, I got to be in his presence 4 times, touched him twice, spoke to him twice and got winked at.  Goal for next year:  either a hug or a picture WITH him.  I know these will be more challenging, since most of the fan events they drill into you not to ask for personal favors like hugs or pics with.  But step 1 for that goal is complete since I just bought my tickets for Comic Con 2013 this morning!  Woot!  Only 11 1/2 months to wait…

After all this excitement, it was time to look at more booths, this time in company of my whole family group.  David and Lindsay only came for Sunday, so they had pretty much everything left to see.  David promptly bought a horses head mask.  This thing was so ridiculously funny….

Then we went back to the chap selling the wooden moustaches we saw on the first day and each bought one, with the plan to wear them on Space Mountain the next day.  I bought ‘classic’ for myself and ‘dapper’ for Jon.  Here is David with horse-head and Lindsay with moustache… 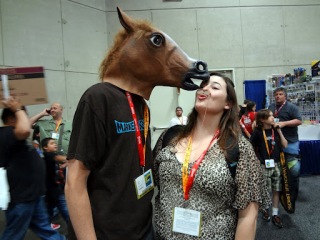 Then we wandered around and David photobomed some people, which was amusing to no end.  We even came across a unicorn chick.  What luck!

Had I thought of it, I should have David wander around and I’d take some crowd shots and then we could play ‘where’s horse-head’ later.  Oh well…

We saw this lovely Admiral Akbar portrait.  I am preeeetty sure I’d never own any Starwars artwork, especially something that costs multiple hundred dollars, but this one made me laugh.

At the Mattel booth, they had a big to-do about the Hover Board!  We got to hold one!  Granted, it doesn’t actually hover, but it was still kinda badass.  Also, they were giving out big buttons that say, “save the clock tower!  Buy a Hover Board!” so you know I grabbed a big handful of those. 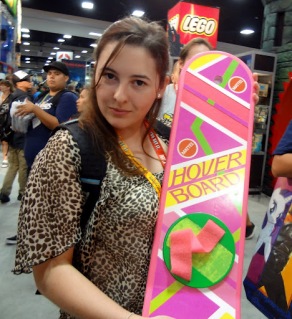 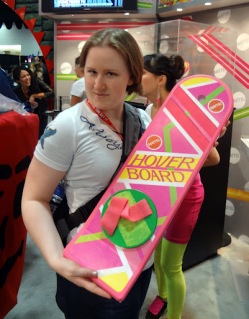 Then we saw this giant fake toy packaging and of course we had to horse-mask it…  And then one with me and Jon, too. 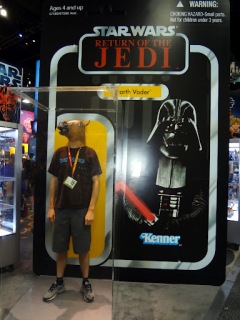 There wasn’t a whole lot more that went on, so here’s a bunch more horse-head shots…. 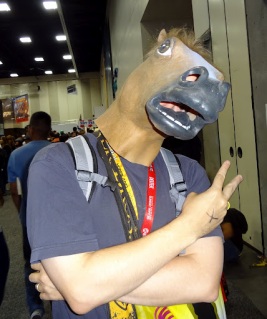 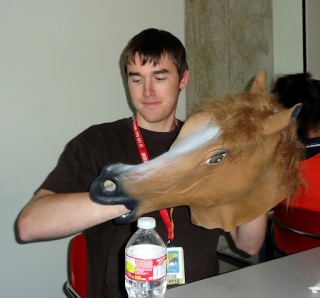 It was nearing time to go, so I took a panoramic shot of the crowd from the second level, and then we went out to the Batmobile display, out between the convention center and the Omni hotel.  They had all 6 batmobiles.

One of the stupid looking ones…

The oldschool one.  Evidently the only one that’s fully functional in terms of all the bat-gadgets and features as opposed to CGI or anything else.

Two batmobiles from those middle batman movies…I don’t really have much to say about them, sorry. 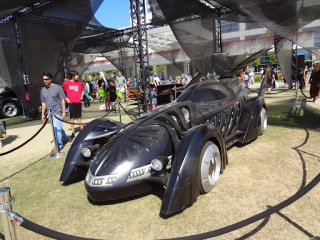 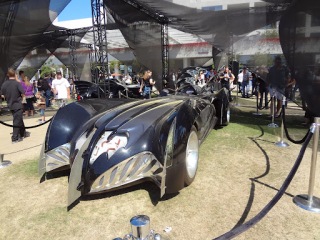 And then another stupid-looking one 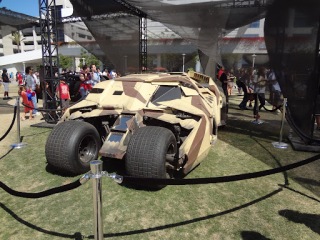 So that concluded my Comic Con 2012 experience.  We went to Disneyland the next 2 days and then flew home.  I woke up sickly on the day we flew home, so I dealt with that the next several days, but luckily I didn’t have to be back at work for 4 more days.

I’m sad it’s all over, but like I said before, I already bought my tickets for next year since they had badge sales for those who went this year.  It was a similar process to buying tickets before, except this time we were able to get all 4 days in 1 go.  Single days as opposed to a 4-day, but I’m ok with that.  This year we also had 4 single days but they converted it to a 4-day at badge pick-up, so it could work out like that.

So who wants to go with me next year?

Want to start over?  Day 1 Here

What do you have to say about that? Cancel reply